Was in the studio again today. Although I've spent the weekend thinking about other things to do, I had left some oil paints out on Friday, so I needed to make use of them.  Despite not being a great completer-finisher, I decided to keep focused on my two big pictures.
On Friday I had also worked on my large Applecross picture. It had started off like this.

Although I liked the watercolour feel about this first layer of oil paints, it did not capture the brooding darkness I wanted, and so after another two layers of oils I had changed the picture to this, and this was what confronted me this morning.
I was not happy with the horizontal effects - was worried that I had lost some energy - and the foreground looked a bit scrappy. And I also thought that the main hill was just too dark, too much of a big blob.  I needed to free up a bit, so I came in and poured some turps on the canvas, followed by some bleach and rubbed away at the paint.  Then I got the paint out and focused first on the sky, trying to calm down the horizontal lines and get a better structure into it. I also loosened up on the foreground, reducing some of the yellw/lime seaweed colour. Of course, having messed around with it, I had to go back and retouch other parts of the picture. Then I decided that the sea needed to be a bit more pewter, and the big hill needed some extra colour. So this is where I left it.

I also finished off the other two pictures. With Kishorn View I really just focused on the sky which I had not been happy about. Again I thought the sky needed a better structure, so I went in with darker tones on the right hand side, and also brought some white across from the left hand side. I also added a little to the rocks and the shorelines. It ended up looking like this (not changed much). 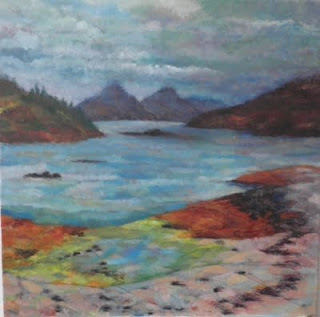 I then cleared away the oils and think I'll give them a rest for a bit. As to whether or not these are finished, I suppose I'll decide in a week or so.  I'd now like to try a little woodblock printing (if I can remember how to do it) or go back to acrylics and get some new ideas. I think I should focus on painting 'things', trying things out.  So I made a start when I got home by painting this wee watercolour.
Maybe I should try some still lifes...
Posted by Aileen Grant Artist at 13:58