Sketching out the Old Year

Well, the weather hasn't been great so far on this trip up North.  Here's a flavour of that recent storm that blew for two days....

In fact it was so bad, I could hardly see out of the window.

As soon as the rain stops, I rush out and try and do a little sketch before it rains again...

And the other day it was dry enough to get the pastels out. Briefly.
Yesterday........

....yesterday it was a bit better - we had a walk along the shores of Loch Torridon, with great views of the Torridon hills.

I was determined to sketch some of the beautiful Torridon pine trees.

And today I did a couple of sketches in and around Lochcarron again. It was a bit gloomy!

For various reasons I've not had as much time in the studio of late. However, I did want to explore a few urban scenes before the turn of the year. I focused first on the sketches I did on our recent sketching group visit to the museum.

I focused first on Greyfriars Corner.  What I liked about this as a composition was the glimpse through the gate to the graveyard, and the gravestone sitting like a focal point. So after re-drawing it once, I started again in graphite, rubbing out and oilbar. 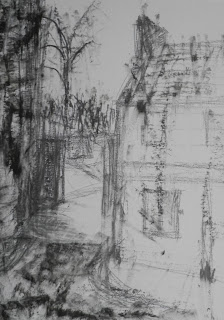 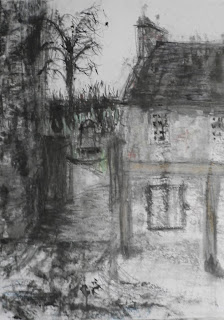 I was wanted to use ink to get a darker moodier look to the painting. So I worked in both diluted and undiluted black ink. 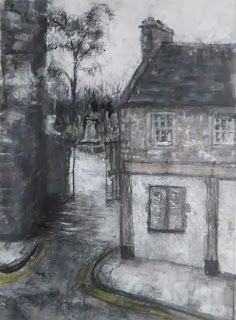 Then I added a little oil-crayon/oil bar for a little colour. I somewhat boldly decided that the double-yellow lines were important to the painting, and so it has ended up like this. So far so good.


The other view I focused on was the view from the Meadows to Argyll Place.  I particularly liked the drama of the white sheen of the light on the wet tarmac and wanted to try and recreate this. This one started to look like this after a bit of work. 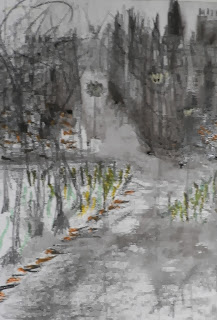 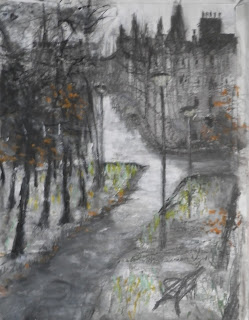 But I realised when I checked it against the original sketch that the position of the trees and the proportions of the street were not quite right. And I had not really captured the drama of the light.  Again by working in ink, I tackled these shortcomings.  I think it's close to the look I'm trying to get, but this pic is a bit out of focus.

Continuing with this urban theme, I pulled out an earlier sketch of Stockbridge Market gateway. I love this piece of townscape and wanted to try a pic. I started on an old piece of card. 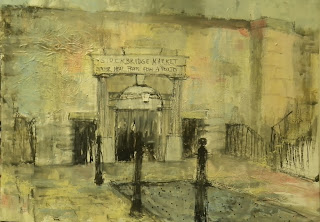 But I thought this was a bit too pale - wanted a darker look. 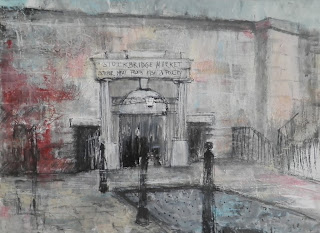 By this stage it was close to the textured look I was trying to achieve, but the card was disintegrating, so I realised I should do a new painting. 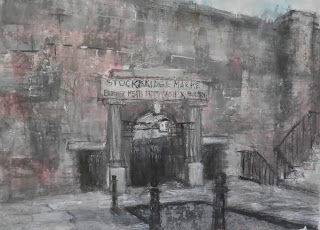 I ended up with something looking like this. However at this stage I thought some of the texture effects were a bit unsubtle, so I continued to work at this aspect. I also introduced a couple of ghostly figures - can you see them? 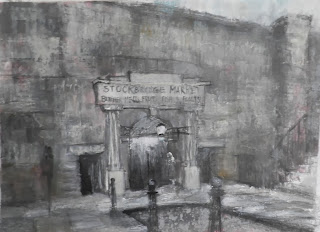 Not sure if I've finished it or not yet. Perhaps it's just a bit too dark now. And I need to go back to my sketching spot and check the proportions against the actuality.

Anyway, I'm setting aside my urban preoccupations for the moment; hoping to do a little landscape painting. If only the wind would drop and the rain would stop raining....
Posted by Aileen Grant Artist at 09:44 No comments: