Sometimes I'm asked to explain what an etching is. There's quite a lot on-line about etching that's worth looking at.  However, the last time I went into Edinburgh Printmakers (Thursday) I took my camera with me.  I thought I would try to give a bit of an idea about how I make an etching.

I had decided to make this new etching using a polymer plate rather than the more traditional metal plate. The product is called Toyobo plate - it can also be called 'solarplate' - and it is a type of photographic plate.  I like using it because I can make an ink drawing as the basis for the etching.

Here's the drawing I started with.  It's an ink and pencil drawing on film (the film allows the light to pass through it and make the marks on the plate). 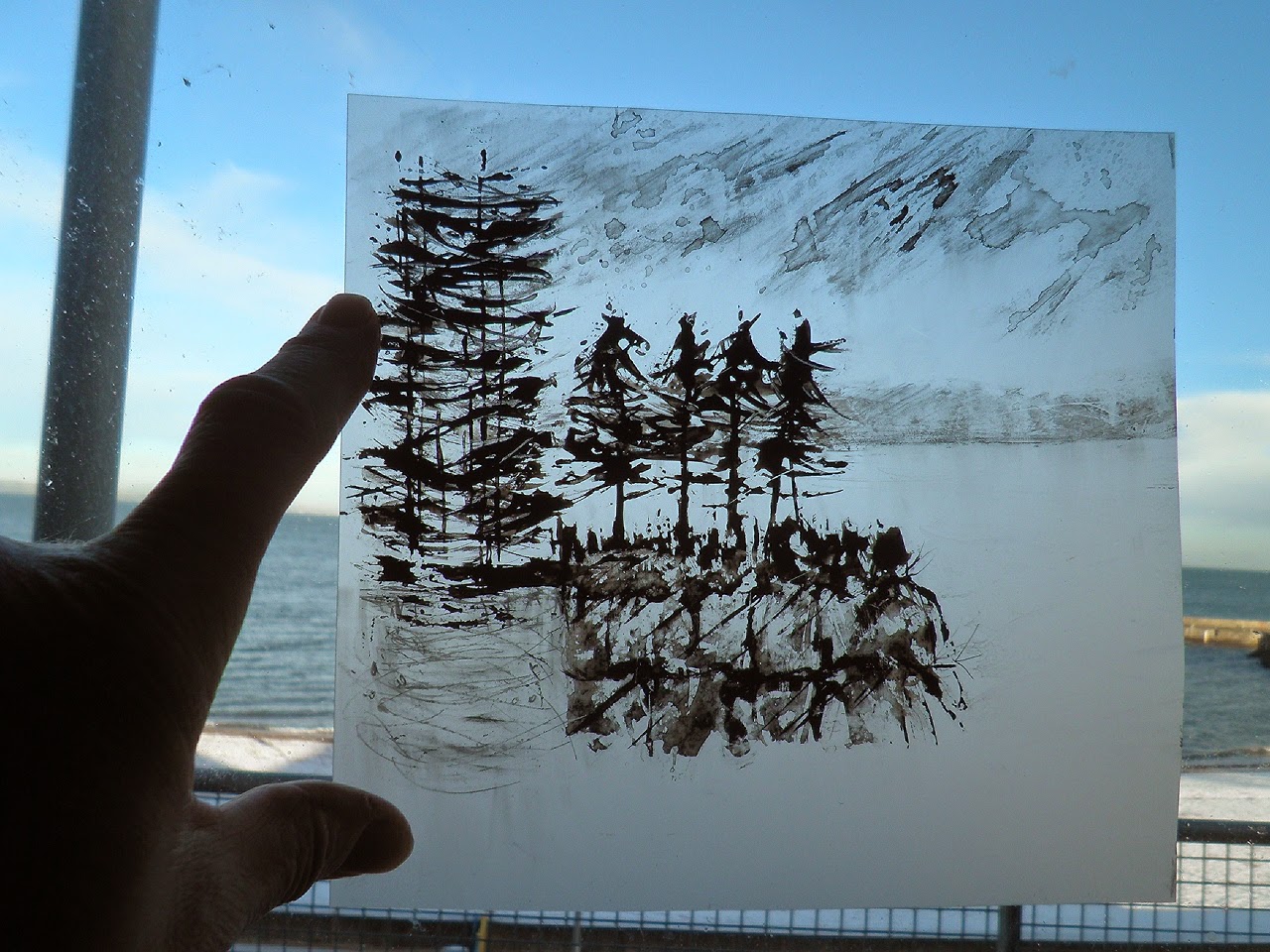 I cut the polymer plate to the right size and exposed it on the light box. There are quite a few steps involved in this, but there's not a lot to see 'cos it all takes place in the dark room!

Once the plate is ready, it can be inked up. (You'll note that the image is now reversed). 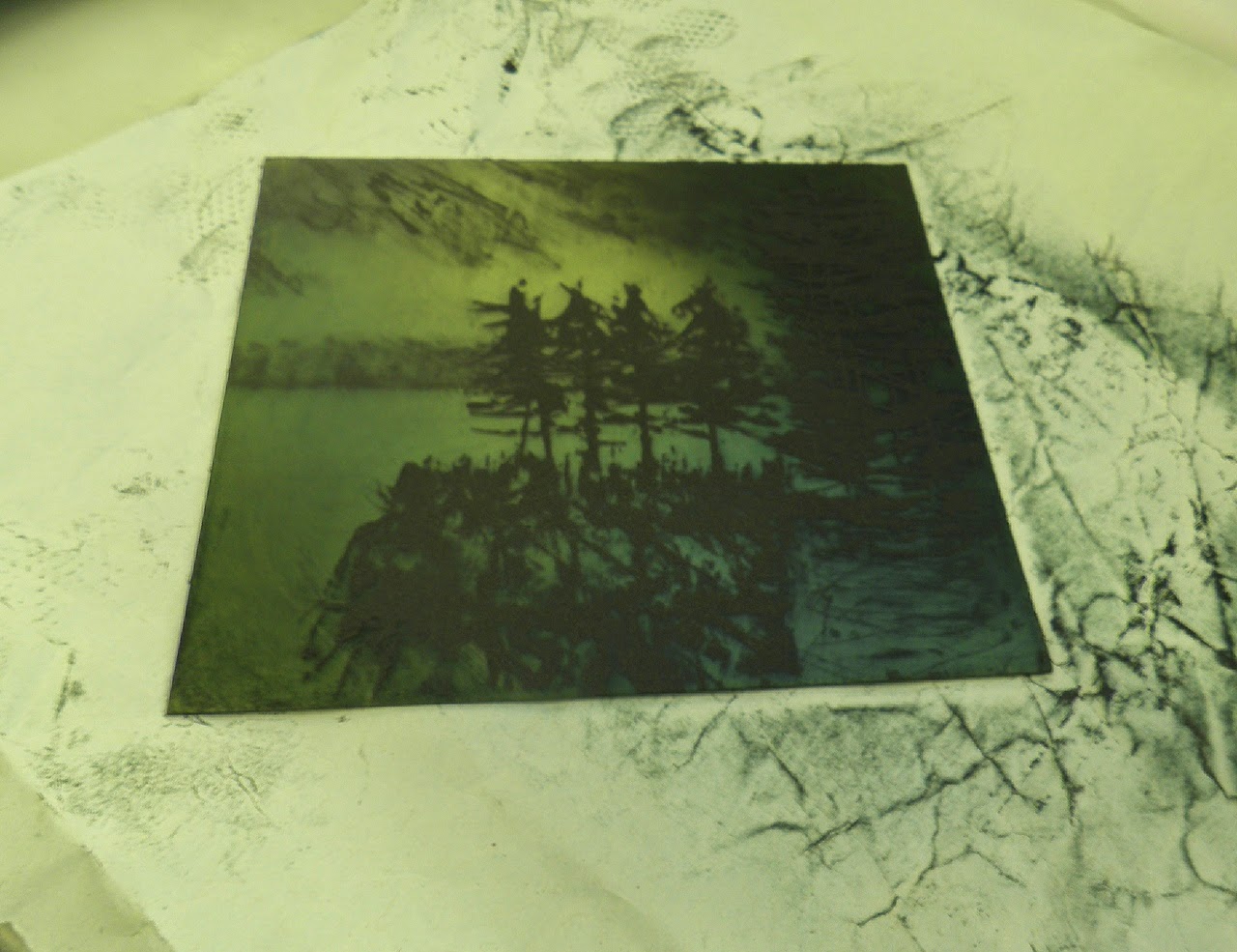 Got the gloves out and decided what colour of ink to use.  This time I chose a mixture of black with brown and blue to make an interesting dark colour. At the same time I was soaking the paper in a bath of water (the ink is oil-based and has to be printed on to damp paper). 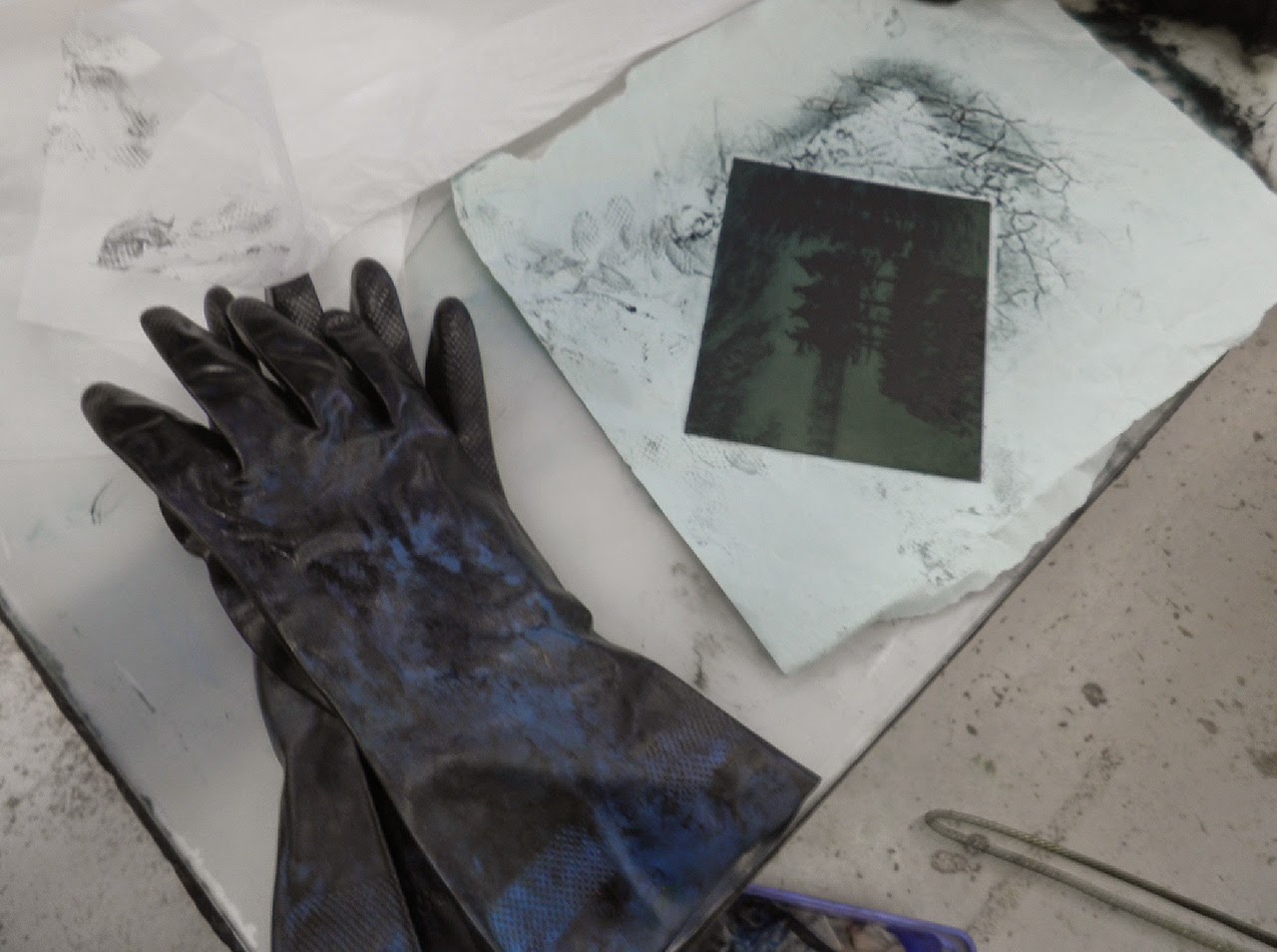 I inked up the plate - spreading the ink across the plate and then wiping it off carefully, allowing the ink to remain in the etched lines - the drawing lines. The ink also sticks to the plate, and as I wanted to achieve a good contrast between the dark etched lines and a pale background I had to wipe the blank areas of the plate quite thoroughly. I have learned that there's quite a lot of skill in inking up plates and that I have to take a lot of care. 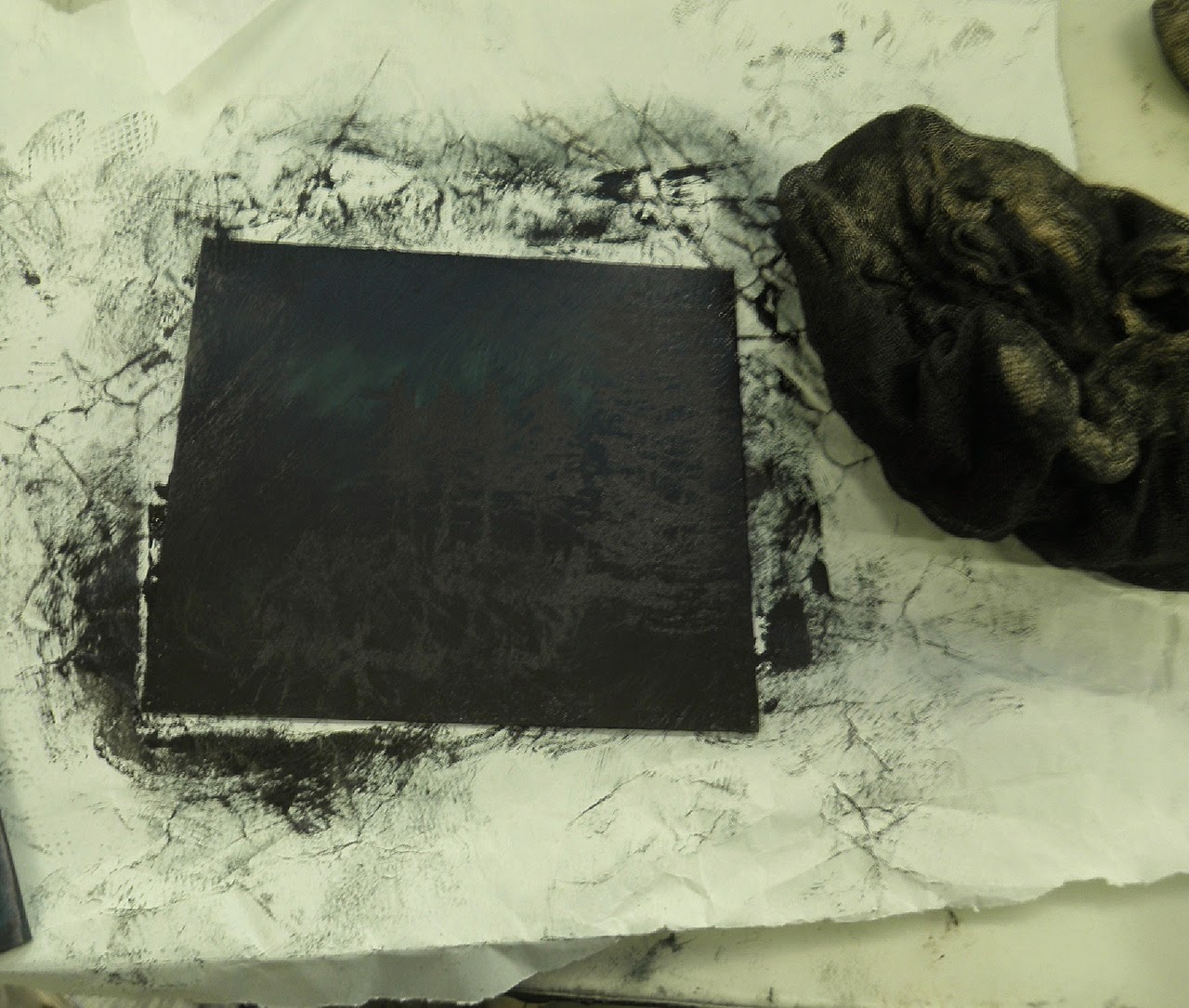 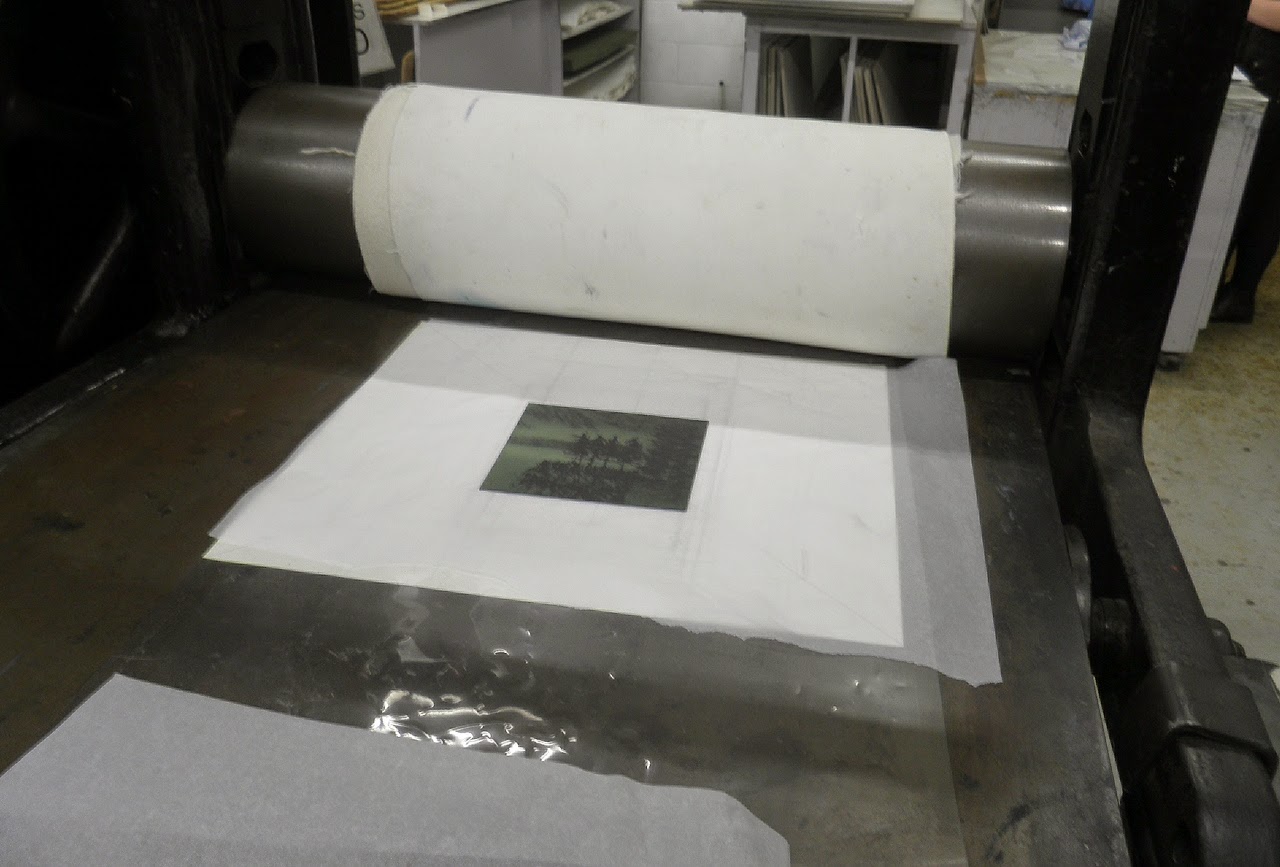 I then placed the paper carefully on top of the plate, drew down the blankets, and got the press rolling. Once it's gone through the press I finally get to the exciting bit....I lift off the paper and see how the print has turned out. Here you can see the finished print and the plate. 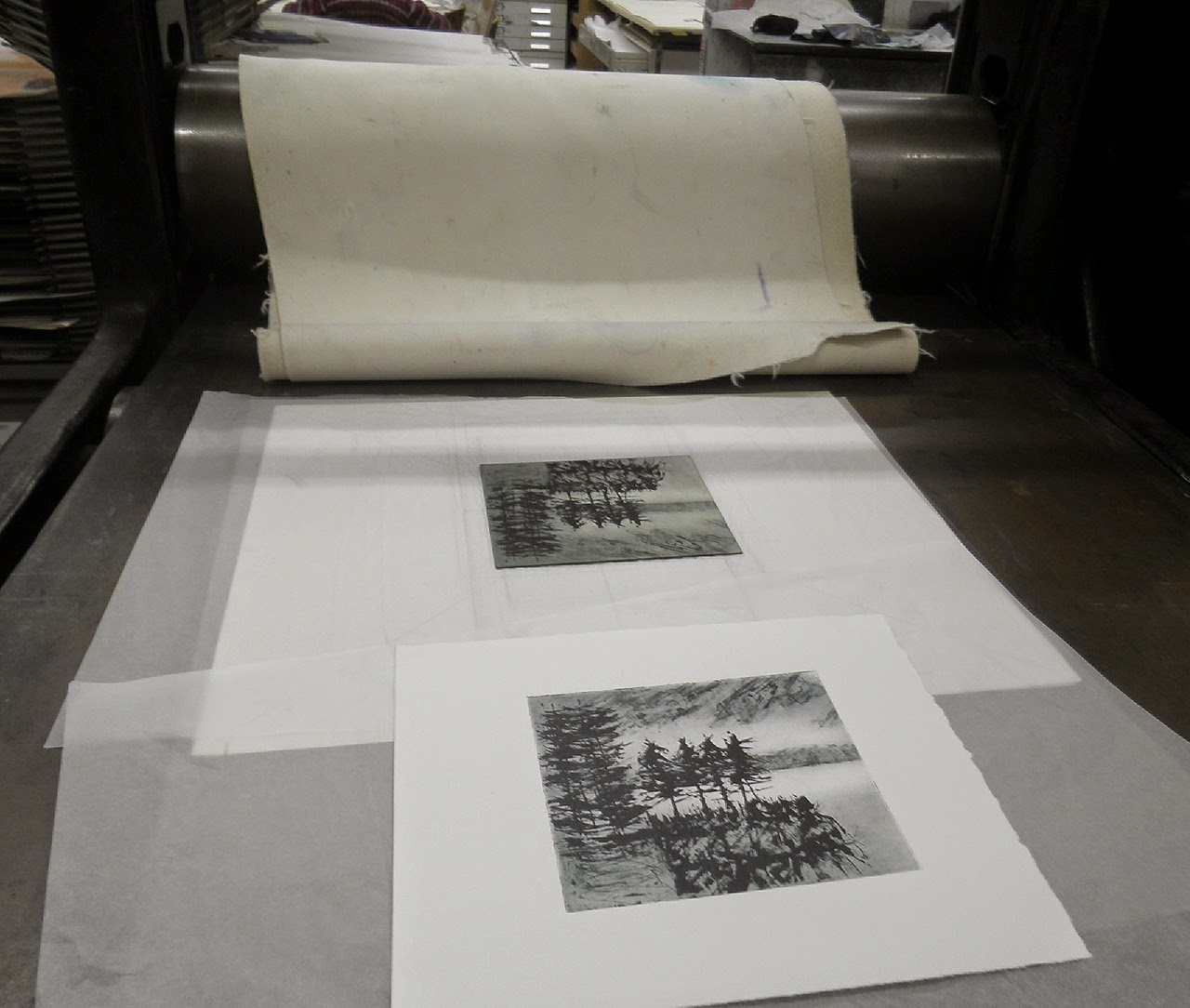 The prints are all laid out on boards to allow the paper to dry, keeping it pressed as flat as possible.  It's quite a challenge to get the prints all looking as similar as possible. You can never get two prints looking exactly the same - that's part of the charm of etchings - but we all try to get them looking as close as possible. These are not bad for me! 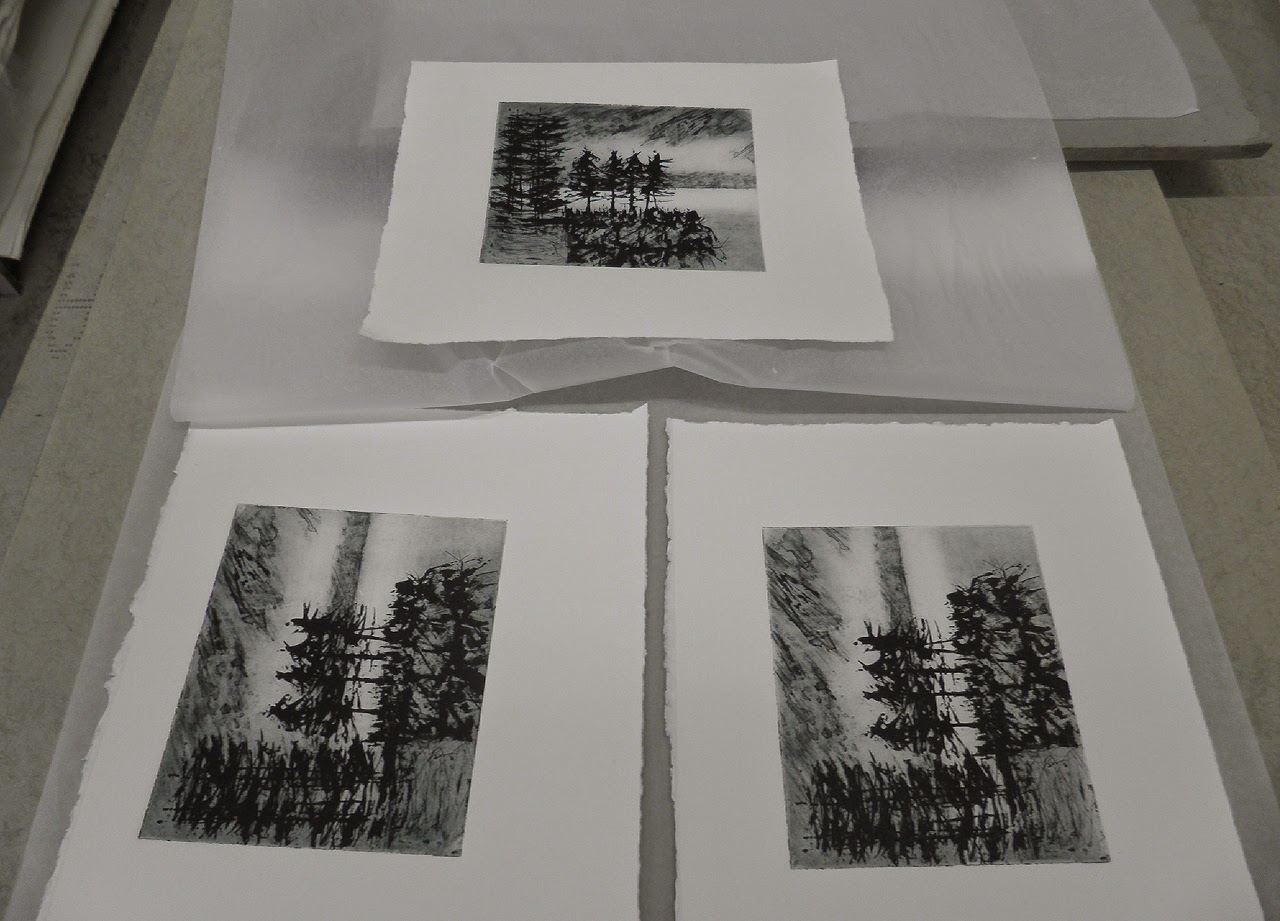 So that's it really. Quite a lot involved in making a print, isn't there? I feel that I'm still learning the skills, but that I am improving with practice.

I'll pick these prints up next week once they are dry.  Hope you like them!
Posted by Aileen Grant Artist at 04:06 No comments: