Bit of a gap with the blogging....various reasons....but today I was out in Port Seton, sketching with Damian Callan.  Damian was running a session with a model  (Michael) based at the harbour, and the weather was pretty good.  I was working in various media.  Here's a charcoal sketch.
It turned out very dark, with the harbour wall as a backdrop, but it was fairly atmospheric.  Got a kind of old-fashioned look.

I tried some colour - using pastel direct on to the page with this one (no drawing).

It was so colourful in full sun - almost oppressively hot - but then the east wind got up and we were cold by the end of the day. In the afternoon we did longer sketches.

This one was a quick sketch using pen and ink, then adding pastel.  And here's another direct pastel picture - the last pose of the day.
But even after everyone left, I carried on and did another couple of sketches.  No models - real fishermen this time.
This one, again, I did with pen and ink, followed up with pastel.
Anyway, a good day's sketching and I may go and do more if the weather keeps up!
Posted by Aileen Grant Artist at 15:19 1 comment:

As this is my last day in the studio for a while, I thought I would continue in the same vein.  I had done a few little thumbnails using coloured pencils in preparation...... 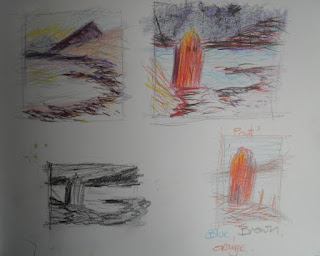 I went back to the acrylic picture I had done of the Applecross Fishing Hut, reinstated the bright roof and darkened the sky.  So now it looks like this. 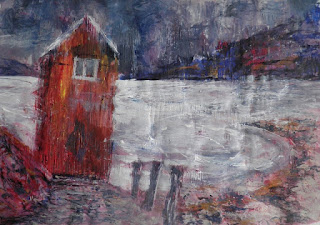 But my main purpose in coming into the studio today was to do some oil painting.  So I thought I would a little study of the fishing hut on a small piece of board. 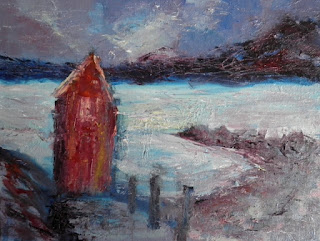 I think the landscape composition works much better, and I quite like the colour in this version.  Also interesting to note how different it looks with the top of the hut just pointing up through the horizon (as in the graphite thumbnail sketch).  I think it increases the sense of isolation which is really what I wanted to achieve.  However, I have not abandoned the square composition, but I did decide to have a go at toning the sea down. 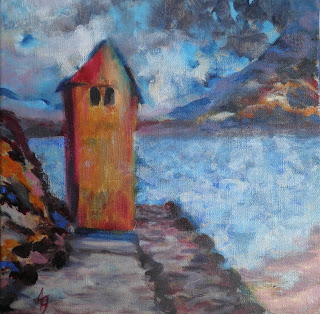 I also worked on the Lochcarron Waterfront picture using the same palette of crimson, ultramarine, prussian blue and a hint of pale yellow.  I started with a small canvas and was very sparing with my use of the yellow.  I think this was my favourite pic of the day. 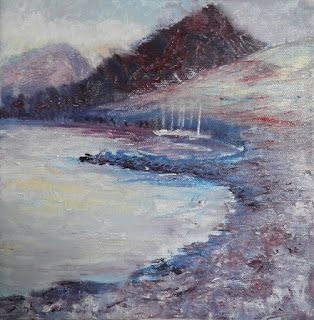 Anyway I graduated on to a larger canvas, but did not finish this next version - was getting a bit tired by this time.  I had run out of yellow too, and so it does not quite have the same colour balance. 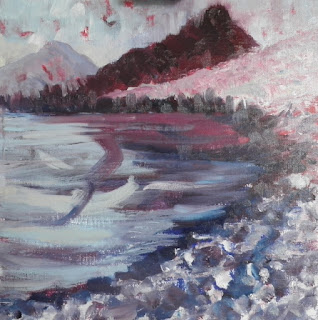 Interestingly, I just cropped this picture wrongly by mistake and ended up with this next image. 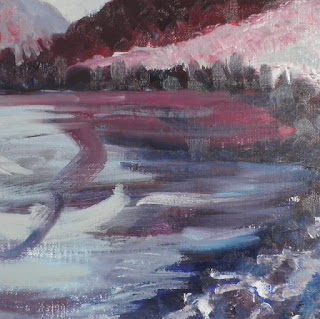 I think this is actually quite a good composition - better than the actual picture.  A bit more abstract, I suppose.  There is an enigmatic feel to it which the picture does not have.  Peter says I should cut the picture up, but it's on board so I am reluctant.  Maybe it will be my next picture idea....
Posted by Aileen Grant Artist at 12:21 No comments:

Staying with the motif

Went into the studio yesterday...wasn't sure what to do...decided to focus on two images - the Lochcarron waterfront and the Applecross fishing hut.  I wanted to try these in colour again - studies in acrylic in preparation for doing a version in oils.  I started with the Lochcarron one, using only carmine and ultramarine on watercolour paper.

Then I added some white acrylic and water.
Then I tried to darken it a bit more, and used a thin stick for different marks.

Then I added more marks (thinking about the houses, trees and boats) and a little more blue.
I wasn't sure about the palette, but was worried about going too far, so I set this to one side and embarked on the fishing hut. I wanted to try it in a landscape composition - I think this might work well - and I used a piece of Japanese paper that I had primed with various colours of gouache, and I also added lemon yellow to the acrylics.  It's always interesting with gouache underneath because it starts to mix with the acrylic in a random manner.  So after some initial work it looked like this.
I was trying hard to get some good texture for the corrugated iron hut.  Actually, looking at this again, I quite like the roof and the sea - it gives an impression of light which I think I may have lost by drawing back into it.  I decided to darken the sea down a bit, lighten the sky and add some black ink - not sure if this was wise.  But, hey-ho, it's done now!  Here's how it ended up...

I think the palette works OK on this (the contrast of the blue and orange).  But I'm still going to try some colour sketches over the weekend before I come back into the studio on Monday.
Posted by Aileen Grant Artist at 09:13 No comments: