The start of another year always seems like an opportunity for a fresh start and this year is no exception.  Last year was just a bit too busy and this blog has definitely suffered.  And the blog is important to me/my work as it helps me to reflect on what I'm doing (and not doing!). Ah well...

I've been very distracted by the snow - we've had so much of it - and every time I pick up a brush, I just want to use black and white. Perhaps this is a good thing, a good restraint. I sometimes use a little bit of colour - as in this one, which is a view of the bay and shore near where I live. 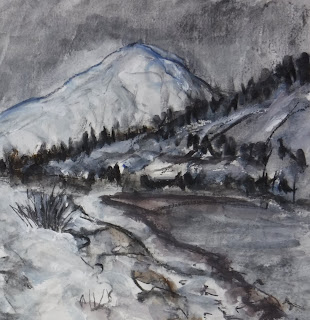 I quite like the looseness and lack of detail I've managed to achieve in this one.  Perhaps it's looser because this started out as a larger pic and I've cut it down.  It's a much better composition now.
I did this pic at the same time, using the same palette of black, white and some blue and brown. 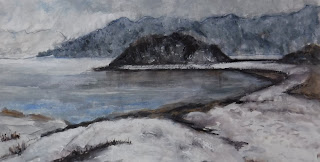 I think this one is just a bit too studied and static, but then it was on a very cold still day.  The thing about snow is that you get these heavy dark lines appearing and this helps me to focus on the structure of a landscape. I've been thinking about this more in snowy studies I have done over the last 2 weeks.  Here's a charcoal drawing which is based on a sketch  - I loved the lines of the shore disappearing into the sea. 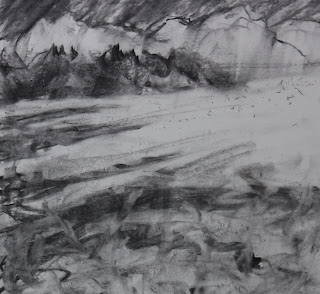 Then I tried it in ink and acrylic with a little gold oilbar.  But it's not nearly as satisfactory as the charcoal drawing, is it? 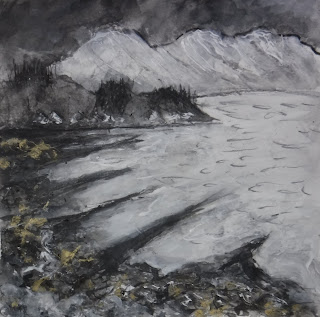 I think the angles of the shore are not quite right and this is because I did it sitting down, not at the easel - should know better!  I also thing the hills look a bit boring - a slab of white.  However I thought the gold oilbar was a good idea, so I used it in this view which I did last week too. 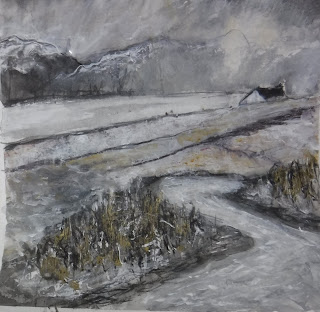 But I'm not very satisfied with this - I think it's a bit woosy, trying too hard to be realistic, but being neither one thing nor another in style.  I had another go at it today, with this result.  I find this much more satisfying, being bolder and bleaker.  More graphic, I suppose.  And the composition perhaps works better (for a mood of bleakness). 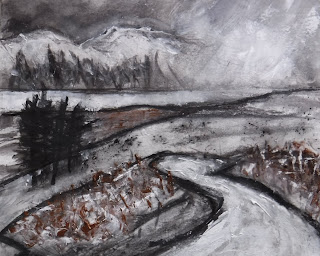 I did do one other woosy one last week, which is this one of the path alongside the shore.  Again it looks overworked and scratchy, but some of the inky marks are quite good, and the light is not bad.  I was getting a good effect by mixing yellow ochre with white.  I haven't re-done it as I'm not sure if this composition really works. 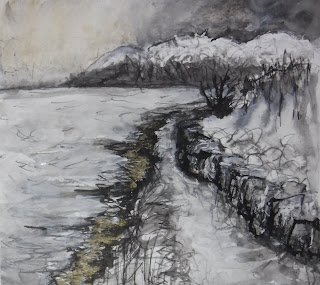 I can only conclude that although I have made a start to the year, there's a lot more work to be done. Choice of materials is so important, and I need to focus on the materials which produce the best results for me.  Boldness with charcoal or graphite usually gets me off to a good start, I think.  The challenge is always there.


Posted by Aileen Grant Artist at 09:19 No comments: