Yesterday was so gorgeous - a most beautiful autumn day - had a lovely walk at North Berwick.  By pure coincidence, I had started a picture in the studio based on a sketch done in an autumn/winter day last year, but I wasn't happy with it.  When I went into the studio today, my head was full of the seaside colours.

I had been doing a picture of the Bass Rock and related islands.  It had started off almost water-colour-like, looking like this.... 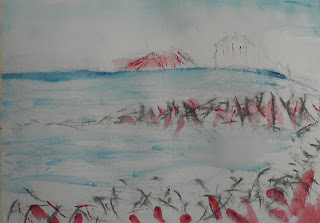 I was trying to hold on to that delicacy of colour - the mistyness around the islands.  I was also worrying about the sea colour.  So working carefully the next stage was this..... 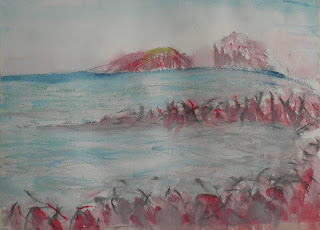 I had then taken it a little further - adding more acrylic colours, working from my colour sketches.  However, I was greeted by this today - wasn't happy! 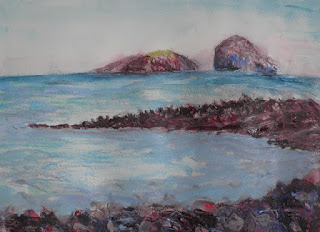 This just looked so lumpy and dead.  So I realised that I must not be so precious about the delicacy of colour nor so literal - no need to slavishly copy what was in my sketch book.  I did a wee sketch suggesting a different foreground - using sketches I did yesterday on the beach at North Berwick - and then I went in with two tones of white acrylic followed by more graphite to get this. 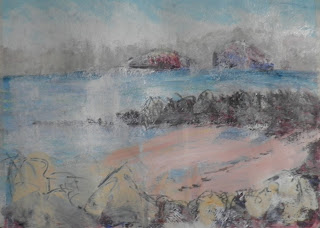 I felt this was going in the right direction.  I remembered the pale barnacle-covered rocks and thought I would put them in the foreground.  And also tried to re-capture some colour in the islands - my original sketches had included ultramarine, crimson and green.  And I tried to loosen up on the treatment of the sea.  So finally it ended like this.
I was quite pleased with this at the time, but later on I wasn't sure.  After I'd finished, I also realised that there has maybe been a subconscious Peploe influence - looking at his beautiful paintings on Saturday at the Scottish Gallery.  Perhaps that has stayed in my head too.
Posted by Aileen Grant Artist at 12:53