I feel I've lost a little bit of momentum this week.  Other activities have crowded in on my time and I've found it difficult to paint.  I was thinking about embarking on a BIG PICTURE ...I would like to do this....but so far haven't done it - haven't even started one. Instead I went into the studio yesterday to do some drawing. As I was intending to go into Edinburgh Printmakers today I thought I should devote a little time beforehand to preparation (not something I'm good at). So I drew 3 pictures on different pieces of film and then decided I could use two of them as the basis for printmaking. That took me all day!

The picture I started with was a little beach image. Still thinking about Harris and the sand patterns and the outlook to the North Harris hills, I drew this out in ink, and today I've etched it on a polymer plate and done a print. 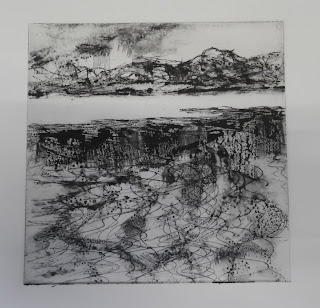 It's quite small and I think it looks quite good set within a large white sheet. When I drew it I was trying to make use of the effects I could achieve on the MMR film - I find that drawing with ink on film is a bit like drawing with charcoal and rubbing out .... you can get quite pleasing loose effects.

The other image I worked on was based on an Applecross view - a little rocky island that you see on the way to the coral beaches in South Applecross. I had done some quick sketches of this (and had pictures in my head). This is how it came out in today's print. 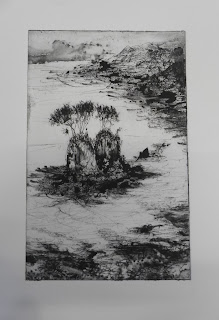 Again with this drawing I was attempting to make the most of the effects on the film.

I have to confess that I felt quite pleased with the prints that I turned out today. But, early days....I'll see what I think of them when I go back and collect them when they're dry! It did feel good to be in the Printmakers workshop again..and now I'm becoming a member! Brill!

Posted by Aileen Grant Artist at 13:43