I was keen to get cracking in the studio today - I reckon it may be my last opportunity this year. I decided I would get the oil paints out to go a bit further with the pics I started the other day.  I ended up with these two.

Both of these are in oil - palette of prussian blue, ultramarine, lemon, crimson and naples yellow (and white, of course) and some graphite stick and pencil added. Far Away Trees is a bit bigger and was on an old piece of board with various things stuck down on it: Skye View is just on board.  On reflection, I think I would be better without the bts stuck on - they are a bit distracting.  Always good to try something different, though.  It was so gloomy today, I had to work in electric light, and so I'm not sure how true the colour is in these - they look kinda interesting here, but I don't expect they'll really be finished!  I do need to do more oils, I think; I need more practice as I don't feel all that comfortable handling the paint. I think it shows.

I felt much better about doing these two, below.  I did them first (to warm up a bit), but probably spent too long on them.  Here's the first sequence. 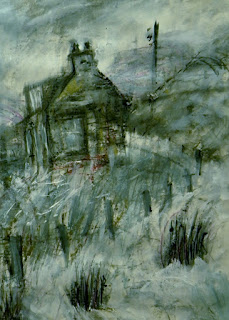 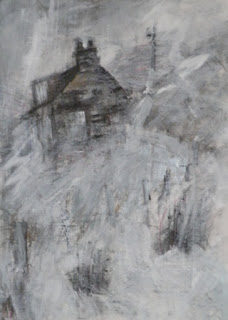 This is a bit curious.  The top pic was where I had left this on Friday - didn't like it this morning, thought it was boring.  So I decided to lose it a bit (added gesso) - the middle pic - and then worked back into it with graphite bar, oil crayon in limited colours, and a little ink.  I do think the final version is much better, but maybe it doesn't show up in the photograph.  I also did this one.... 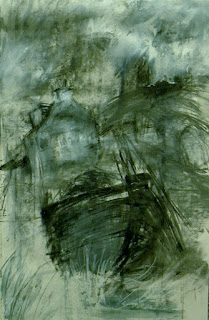 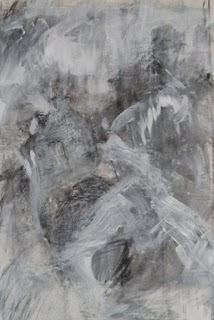 This was the same idea - the top picture with the boat was what greeted me, and I was even less happy abut this - I really liked the boat but thought the composition was overly complicated.  I thought that the boat didn't work, maybe too simplistic a treatment?  Anyway, I applied even more gesso, and then drew back into it.  The castle on the hill became a church and the boat became a clump of grass.  It's nicely dark, this picture, and now I can't decide which is the better of the two black and whites.  I will try another composition with a boat in it, as I think that could be interesting, and reflecting on these half done pictures has given me some ideas.

Happy Christmas to all my readers....I probably won't be back until the new year (unless I manage some cold sketching over the Festive period).
Posted by Aileen Grant Artist at 11:40