I was continuing with developing the sketches I did on Jenny Martin's course.  In the sketchbook, I had done this little quick pencil sketch when I was at Newhaven - almost a thumbnail.  Here it is. 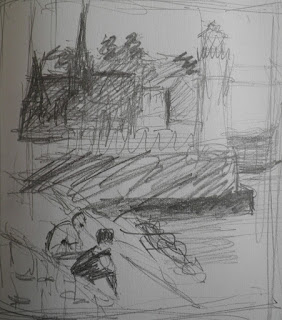 Jenny had encouraged us to take photocopies and change the scale.  In doing this, I thought it might look a bit more interesting with larger figures in the foreground.  I therefore increased the scale of the figures to make a different picture.  This of course meant I had to change the scale of the lighthouse for the picture to make visual sense.  So it ended up like this. 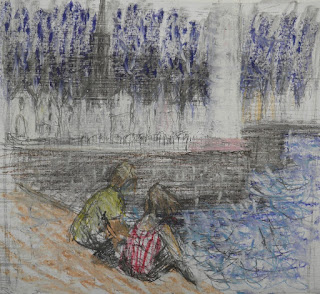 Back in my studio, I decided to have a go at painting the scene with the larger figures, but I was not certain about putting figures into a picture like this.  What do the figures signify?  Surely there should be some deeper meaning or symbolism to figures to make the picture interesting?  I thought then I would put one figure and a ghostly figure, and so it ended up looking like this.

I don't think I like the ghostly figure so I'll probably paint it out.  But the juxtaposition of the lighthouse and the church kinda works.  This is in oil pastel mostly, with some pencil and a little acrylic.

I did another version of this Newhaven view...without figures.  However I was trying to do something clever with the lighthouse.  So that ended up first of all looking like this. 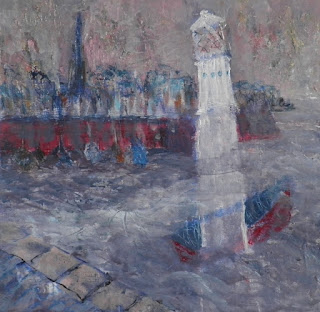 Now, I didn't think this worked at all, and so I tidied up the lighthouse.  I also managed to shrink it significantly and so now the scene no longer looks like Newhaven.
I quite like the palette as it is so gloomy, and the pink in the sky chimes with the pink granite of the lighthouse base (which actually is realistic).  Lighthouse still needs fixed (it's a bit skew-whiff), but maybe it works as a picture despite the lighthouse being miniaturised.  This one is in oil pastel, acrylic and pencil - bit of a mixture.  Will see how it looks when I'm next in to the studio.
Posted by Aileen Grant Artist at 13:49