Just spent a week in Venice - a week of sketching with pals.  I really enjoyed it!  I was able to concentrate on sketching with no distractions - a real treat. And a completely new environment.

I was so looking forward to it, but once we arrived, I think we were all overwhelmed by the beauty and complexity of Venice; one of the biggest challenges for us was what to focus on in this magical city.  We were a loosely organised group, completely free to go off and do our own thing.

On Day 1 I started by trying to 'sketch myself in'.  I sat down next to a canal near where we were staying (in the Dorsoduro) and made a start.  I caught sight of a view along a small canal with a rather quirky and intriguing building in the distance - a bit of a focal point - with the context of the canal and a bridge in the composition. 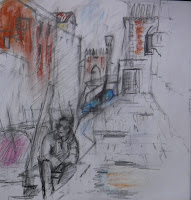 As I was sitting there, someone came out of a door and sat down right in front of me and drank his cup of coffee.  I decided I had to put him in the picture.

I found it interesting to be away from the main tourist hot-spots.  It made me think about who lives in Venice and trying to find the 'real' Venice as a sketching subject.  But Venice looks like such a confection, I think this makes it unlike any other city I've been to.  While it's not a film-set, there are very few parts of the city which are not full of amazing beauty and therefore of interest to visitors.  Another thought going through my head was that so many artists have drawn and painted Venetian scenes, it was hard not to think that 'It's all been done before and by much better artists'.  So all these thoughts led to a feeling of uncertainty about what to sketch.

So here I was in a very urban place where I could hardly see a tree or even the sky, and there was not a hill in sight.....what was I to sketch?  There were only buildings....and water. Perhaps a bit of my planning background reasserted itself, a throwback from student days.  I tried a variety of subjects - single doors, like this..... 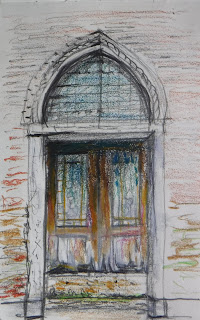 .... ironwork patterns, groups of windows, buildings.  Patterns like this. 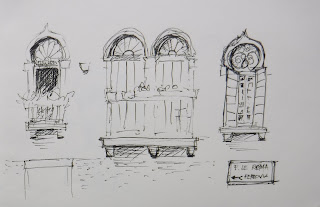 Initially I stayed away from the beautiful palaces - and not just because I thought they looked too complex to sketch!  Was there any modesty in Venice, some simpler forms?  I found this simple building just outside the convent where we were staying.  Quite cute and worth a sketch. 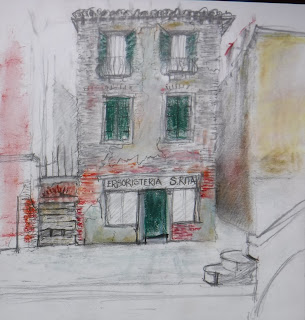 I realised when I was drawing this that the steps at the end of the bridge were an important piece of context to be included.  I also realised that I was drawn to the beautiful brickwork and the random patterns made by old brickwork alongside decaying stucco. And the doors that opened directly onto the canals, like this one. 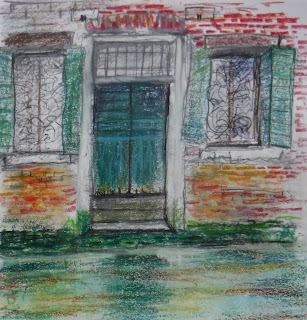 On our second day we went off to Canareggio, via the station.  My initial impression was that it was a bit dark and oppressive, but I soon found a bit of colour.  Actually, I really loved the Canareggio area, and I can't believe that I forgot to visit Tintoretto's house which is located there.  I think this old rusting watergate was quite close to it. 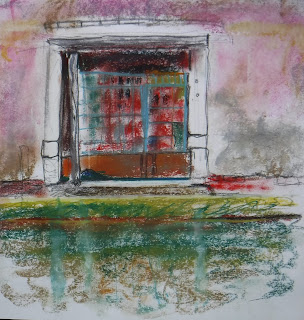 And later on I stumbled upon some old industrial buildings - more lovely colour and interesting patterns formed by old brickwork revealed by decaying roughcast. 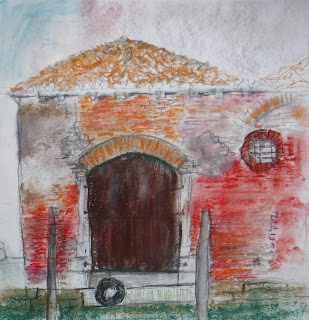 On Day 3, we went to the island of Burano.  Suddenly there was a big sky, and trees. The buildings were not so tall and it felt much more open. I did a few sketches there 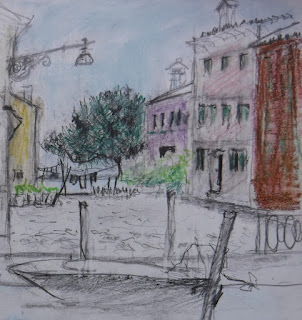 Burano is famous for its colourful buildings, like these ones.... 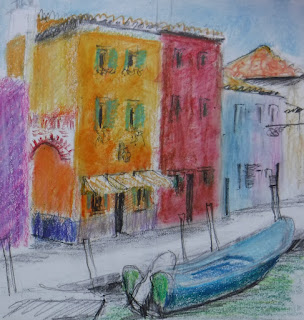 And the adjacent island of Mazzourbo is a bit wilder and rather lovely.  Found a beautiful greenspace with sculptures and a view of a tower.  I was happy to get a bit of breathing space! 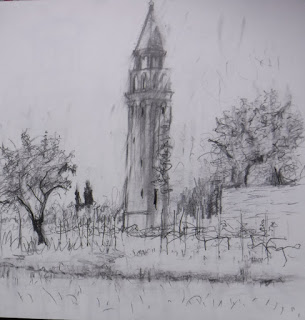 The next day, I thought I must have an attempt at drawing a couple of old palace buildings.  I used ink in order to get the details of the window shapes - so vitally important to the character of the building. I found a quiet viewpoint across the Grand Canal from a rather drab but lovely palace, so I focused on drawing and restrained the amount of colour. 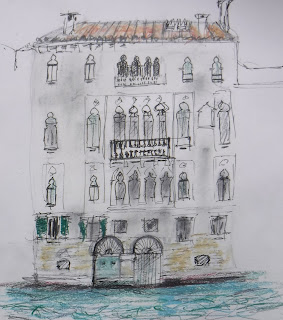 The next day I had another attempt at a palace building, this time using pencil. This sketch took me an hour to finish, but I do quite like the composition, with the poles in the foreground. 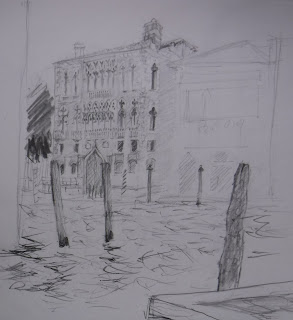 I realised by the last day that I didn't have many tourist-style views - where were the gondolas? -  so I had a go at the view from the Sa Toma vaporetta stop. Again I felt a bit overwhelmed by the complexity of the view but using charcoal allowed me to simplify the composition. 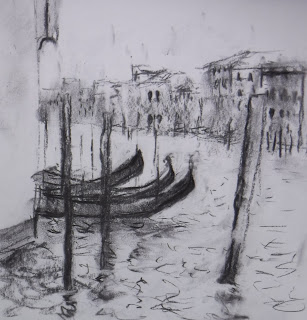 In the course of the week I also did a few 'tall' sketches in a smaller sketchbook, using a sketching pen.  This forced me to take a bold approach, and concentrate harder. 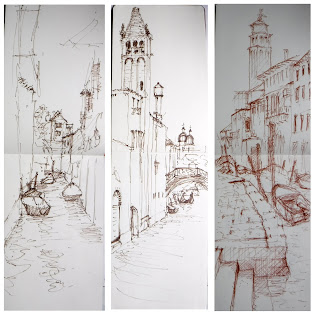 These are only a few of my sketches - I have lots of material to draw upon. But where to now?  The sketching group is hoping to bring forward a small exhibition and I'd like to have something to contribute.  And I find it important to 'strike while the iron is hot' and take the work forward while the images are still fresh in my mind.

In my next blog I hope to have a few emerging paintings.