New Studio! Up and running!

My big project at the start of this year has been to get a wee studio built. I've been planning it for a year and have had a few setbacks for one reason or another.  Eventually I decided to build a posh garden shed, or rather a 'garden room', courtesy of  a firm called Bridge Timber

Doing a building project in this part of the world in the month of January is not an easy task, but the guys set to it very cheerfully, despite freezing temperatures and days of never-ending rain. Within a few days this was how it looked.... 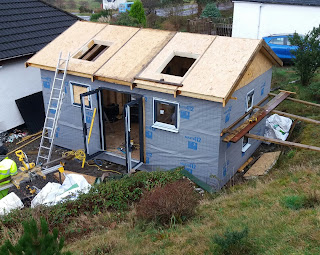 and within two weeks it was fully finished, like this.... 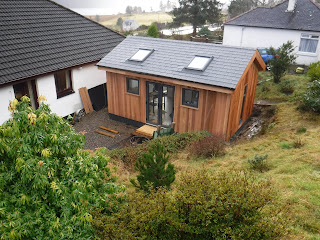 I still have a few externals to do, like proper steps and a bit of landscaping. But the internals have been more of a priority.  The space looked so big at first - a lovely empty space - and it took several days to paint it. 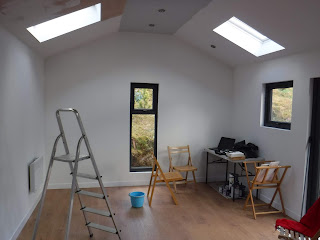 But by the time I got the printing press installed and moved the rest of my stuff in from my temporary studio, the space had filled up quite a bit. 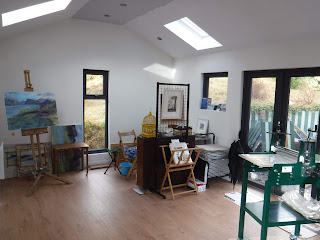 It has filled up even more since this point - I suppose a bit of creative clutter doesn't go amiss, but I'm trying very hard to be organised. In the past I have allowed clutter to build up and I found it very frustrating, distracting and bad for creativity: now I have a chance for a new start and I'm determined to be more organised. 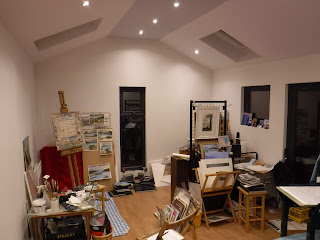 At last I've been able to get on with some work. Here's what I've been up to.
Doing a bit of printmaking. (Here's my reflection in the velux window...a kind of arty photo!) 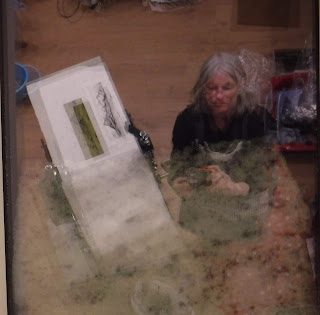 And doing a bit of painting.  Trying to keep my palette simple (not too many colours... and choosing those colours carefully). 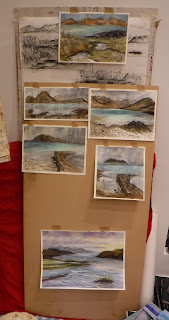 I've also been thinking about themes to focus on this year.  I'd like to create a body of work and not be all over the place. The trouble is that the themes that interest me are a bit challenging for picture-making.  Themes such as environmental armageddon - maybe that's too depressing, anyway.  So I'm thinking about metaphors for loss, change and impending doom (nice, eh?)....motifs like abandoned villages, stormy weather, damaged landscapes.  Perhaps my most recent photopolymer print - Skyburst - is along the right lines. Something to build upon perhaps. 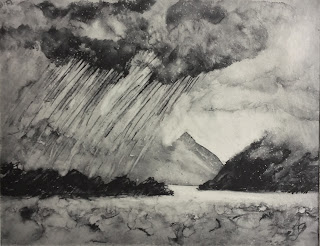 Anyway, I have some themes and ideas, I have the materials and I have the working space, so I really have no excuses now.  I just have to fight off the siren forces of distraction and procrastination.  As you know, life can so often get in the way of art, and that's the biggest challenge of all.

Posted by Aileen Grant Artist at 09:41