The difficulties of finishing

Went into the studio with the intention of finishing off some pictures, clearing the decks before I embark on a new body of work. But I'm afraid I didn't get anything finished....except this little picture

This picture actually started life as part of a larger picture which I sliced off.  It was in acrylic, charcoal and oil pastel, and I added a little graphite today and did some rubbing out....I think it works as a little picture...but maybe the sea should be a little darker now I see it again.....

I started another sketchy picture just to "warm up", and got a little pre-occupied (again?).  I decided I would have a go at a picture of snowy hills.  It was based on a view I saw while on our recent walk above Achnashellach.  I knew this would be difficult..I think painting snow is one of the most difficult things to do.  Also, I wasn't sure about the composition so wanted to do a large picture which I would later crop.  The main thing was to try and do an atmospheric picture.  Anyway, I did the usual sequence - charcoal-water-more charcoal-oilbar-white acrylic-coloured ink-oil pastel-etc.  This was how it progressed. 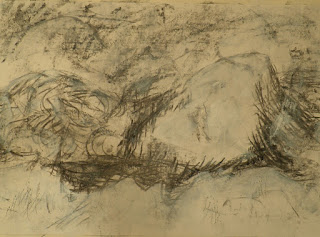 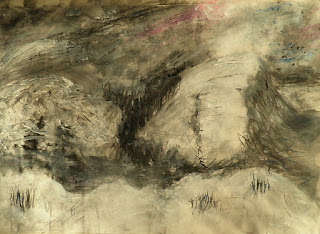 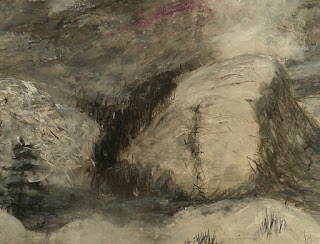 So, guess what?  I've overworked it again.  I think the second picture in this sequence is by far the most interesting.  The bottom two are the same version, just cropped differently.  When will I learn?  I need to pause a little longer once I get to a certain stage.  One answer would be to work on more than one picture at a time, so I must try this in future. But maybe I can salvage another little picture out of what I did today.

So - thinking of Friday - another sketching day and I'm going to take the opportunity to do some indoor scenes (or street scenes if the weather is OK). I'm hoping this sketching day will be a springboard for me to embark on a new body of work with an urban context.

Posted by Aileen Grant Artist at 15:17